I was envisioning more of a snowflake craft extravaganza when I thought about a January seasonal celebration, but then Epiphany! I usually try (and fail) to make a king cake for Mardi Gras. But when I was looking up ideas for epiphany this year, king cake kept coming up. Then it hit me, KING cake= 3 KINGS! Duh!

Usually my cake is tasty but ugly. My dough is just never right. But this year, I went straight to my favorite baking recipe site: King Arthur Flour. You guys, if you’re not using their recipes, you are missing out! They are so easy to follow and they never disappoint.

So this year I kneaded it waaaaaay longer than I normally do and it turned out so good! It rolled out into an actual rectangle JUST LIKE IT WAS SUPPOSED TO! And it was absolutely delicious. I didn’t roll it out quite big enough so it baked into a bit of a blob, but there was an actual spiral with filling inside. And it was soooooo good. I just need to remember to order some purple sugar sprinkles. My just-add-red-food-coloring-to-the-blue-sprinkles-plan didn’t ::quite:: work out the way I had planned, but the kids didn’t complain. 🙂

I love the new year! Everything always seems so fresh, shiny, new, and full of possibilities. 🙂 I’ve been doing some project updates this week, but for the sake of clarity I’m going to do a very brief recap of my 2020 goals.

I have been trying to decide how I want to structure my goals for this year, but I just can’t choose! The time for dillydallying is past though so here goes. As much as I loved 20x20in2020, it was kind of a lot to keep track of and I felt like I was shoehorning in some goals that didn’t really fit the structure, so I’m changing it up this year. I’ve decided to pick 10 things to work on this year, and then I’ll probably still set smaller monthly goals.

So then I’m left with January goals…

Whew! That was a long post, but it helps me to organize my thoughts and set goals. I’ll try to have some more posts with pictures soon!

I thought it might be good to do a little progress report on all of my quilts. One of my goals for 2020 is to actually ::finish:: some projects and I’m hoping this helps motivate me to accomplish that!

All this to say that my big quilty goals this year are to finish the hexagon, butterfly, and caterpillar tops. 🙂

This year, I feel like I’ve made loads of progress on my quilts, decent progress on Project Life, and minimal progress on my scrapbooks. I’m considering a big push to get some scrapping done this week to avoid getting further behind. So some mini goals…

I’m currently debating if I want to try for another massive year long goals project. Maybe? I do like the idea of 20x21in2021. But some of my goals don’t really lend themselves to that format. So maybe set 21 project goals instead? I know that I will probably end up starting some new projects (lol) but I’d also really like to finish some projects. Like catching up with the scrapbooks. The butterfly and caterpillar quilts. The hexagon quilt. Still pondering.

Y’all. Halloween is one of my favorite holidays. And I’m so sad that it’s so weird this year. No pumpkin patch, no trick or treating, ugh. It sucks. BUT!!! I decided that I had to find a way to make it fun for the kids anyway.

I felt like a massive slacker, but I didn’t have it in me to make costumes this year. My plan was for the kids to just dress up from their dress up bin, but then earlier this week that made me really sad so I ordered some costumes as a surprise for the twins. They were huge hits with my Frozen obsessed Mia and ninja obsessed Xander. 🙂 Kate didn’t want to dress up until this morning, lol, but luckily she was able to dig out last year’s costume.

I was looking through my pinterest board to see if anything looked fun and I found this pumpkin balloon activity I had pinned years ago. Luckily, RaptorDad is ever indulgent with my crazy ideas so he tracked down some balloons and helped me make this.

We shoved a piece of candy in each balloon as we were blowing them up and then taped them together into a pumpkin shape. Then the kids took turns popping the balloons and finding the candy. It was a ton of fun. 🙂

Y’all.  Whole Foods makes this insanely addictive cake called a Chantilly Lace cake.  It’s RaptorDad’s favorite.  🙂  Considering that every time we venture into a Whole Foods I manage to blow the grocery budget on gourmet olives and baked goods, I decided that I needed to learn how to bake this cake myself so I could limit our exposure to temptation.  lol.  After much searching, I found a copy cat recipe that looked pretty amazing and assembled all of the fancy ingredients.  Except for, you know, sugar.  lol.  So back to the store we went.  Y’all.  It did not disappoint.

It’s probably a good thing that this recipe is insanely complicated because if it was easy, I’m afraid I’d be making it once a week and we’d all gain 1000 pounds.  lol.

Kate was working on her edible model of the Alamo (why???) that was due today, but she took a break to make a fondant flower for the cake.

Y’all.  My brain is mush, but I PROMISED you a blog post so here it is. 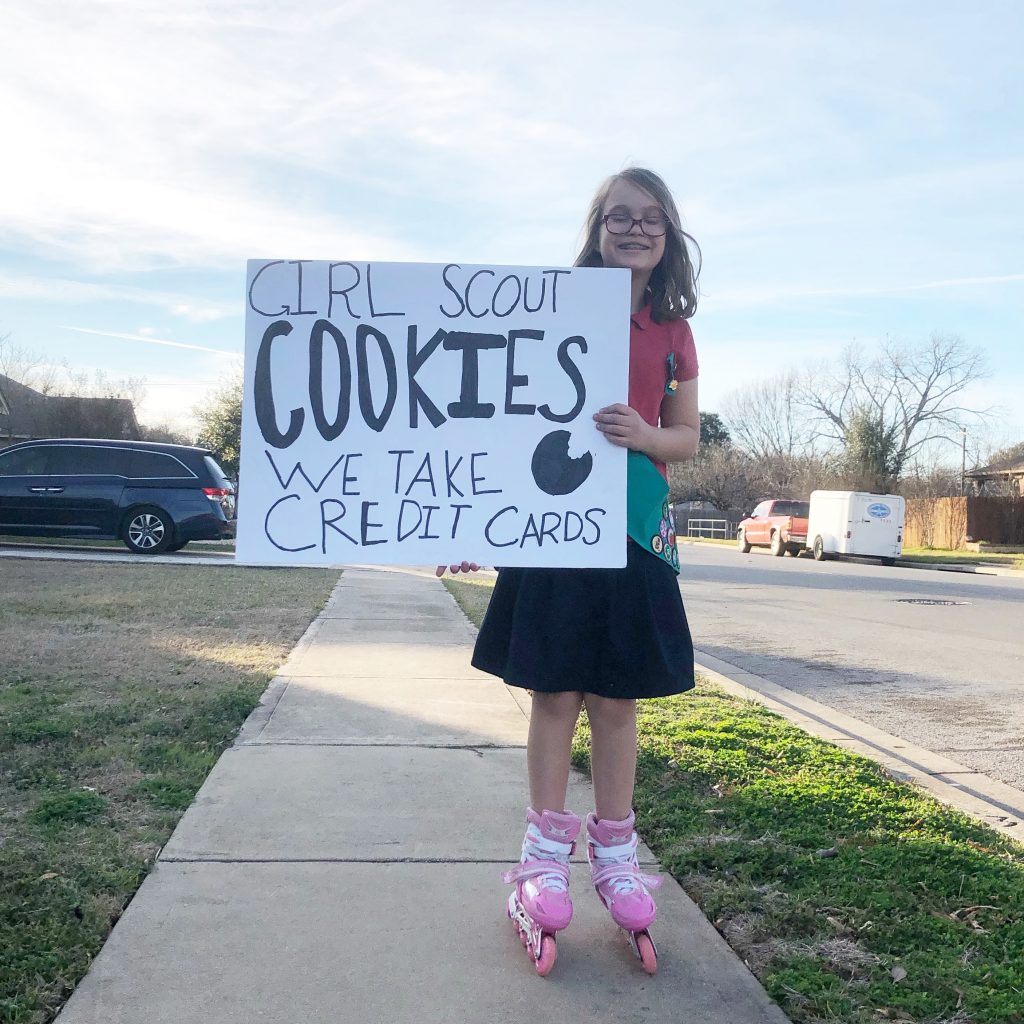 I’ll be back next week with some quilty, scrappy, yummy, updates.  🙂

At the beginning of the summer, I bought something called a Pogo Pass.  Basically, you buy the pass and then you get 1 or 2 admission tickets to a bunch of different places over the course of the next year.  (If you’re interested, I think I have an affiliate link that I can email to you that lets you get the pass for $39.98)  Has it been worth it?  Hmm…  I actually just totaled up what we’ve used so far and I’d say it will PROBABLY end up being worth it.  For sure, it encouraged us to get out and try new places we wouldn’t have gone to otherwise so in that sense it was absolutely worth it.  And I imagine we will hit up 1 or 2 more places before our passes expire which will make it worth the sticker price.  That said, we didn’t take advantage of a lot of the places on the pass either because they are in Waco (I’m not driving 2 hours to take my kid roller skating) or the just weren’t things I could do with the babies (looking at you Hawaiian Falls.)  But, if you had only older kids I think it would definitely be worth it.

Which brings us to today!  I was looking through the Pogo Pass trying to decide on something fun to do over Winter Break, and saw Wonder World.  Um, yes please!  I am addicted to cheesy roadside attractions and I have wanted to go to this place ever since I went back to school at Texas State to get my teaching certification.  Was it fun?  Yes.  Was it insane with 2 preschoolers?  Yes!  Am I disproportionately disappointed that they didn’t sell souvenir patches?  Yes.  lol. 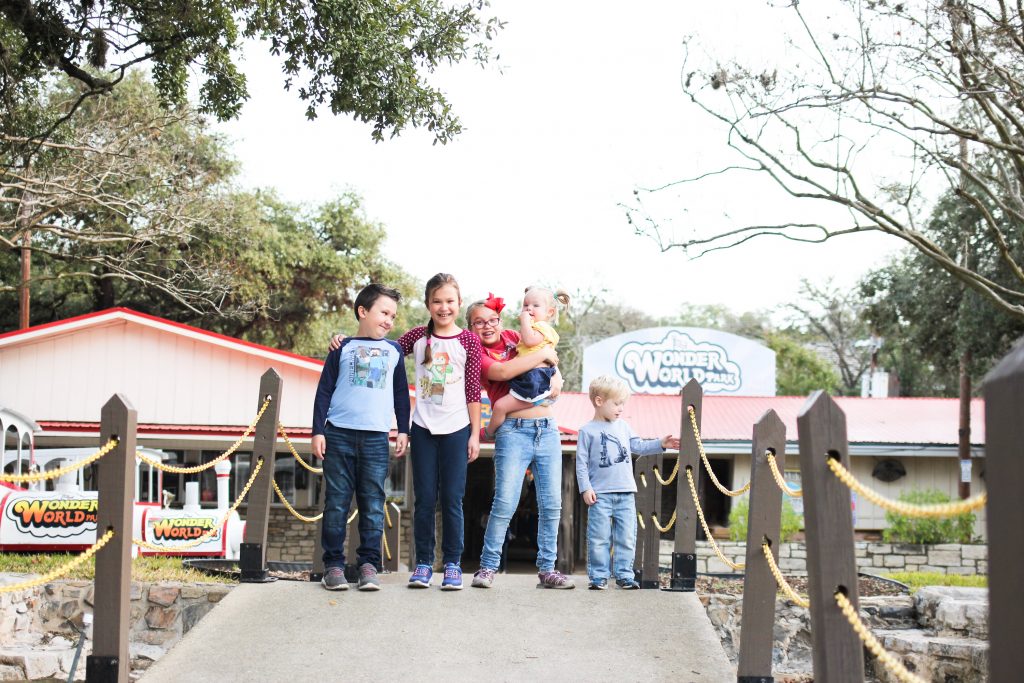 Luckily Kate’s BFF’s mom is super duper awesome and she always agrees to come along on my crazy adventures.  The Pogo Pass got us into 3 of the 4 attractions and I decided that was enough for my crew, we just missed out on the Wildlife Train ride.   My friend found a Groupon that included all 4 attractions, so we did the Cave, Observation Tower and Anti-Gravity House, then had a little picnic and left before they got on the train.

The Cave was fun, but to say that it wasn’t very accessible would be like saying the Sahara is a little bit dry.  I wish I had brought my wrap so I could have worn Mia, but I ended up just carrying her for large chunks of the tour while abandoning my friend to deal with Xander.  Did I mention she’s awesome?  lol.  Still, I think this is a good starter cave for kids because they can actually touch all of the walls which makes it less stressful.  That said, there were some tight spots so I wouldn’t recommend it for someone who was claustrophobic.

Kate loved the observation deck and even with my deep fear of heights I can agree that the view was lovely.  But the Anti-Gravity House?  Oh lord.  You could not pay me enough to reenter that place.  It’s designed to be disorienting, and it straight up made me fall over.  Luckily, I was near a helpfully placed bench, but yikes.  I’m still dizzy just thinking about it.  Kate, on the other hand, would have happily spent 3 hours in there.  Even I’ll admit that they had some pretty cool optical illusions with balls and water appearing to roll uphill. 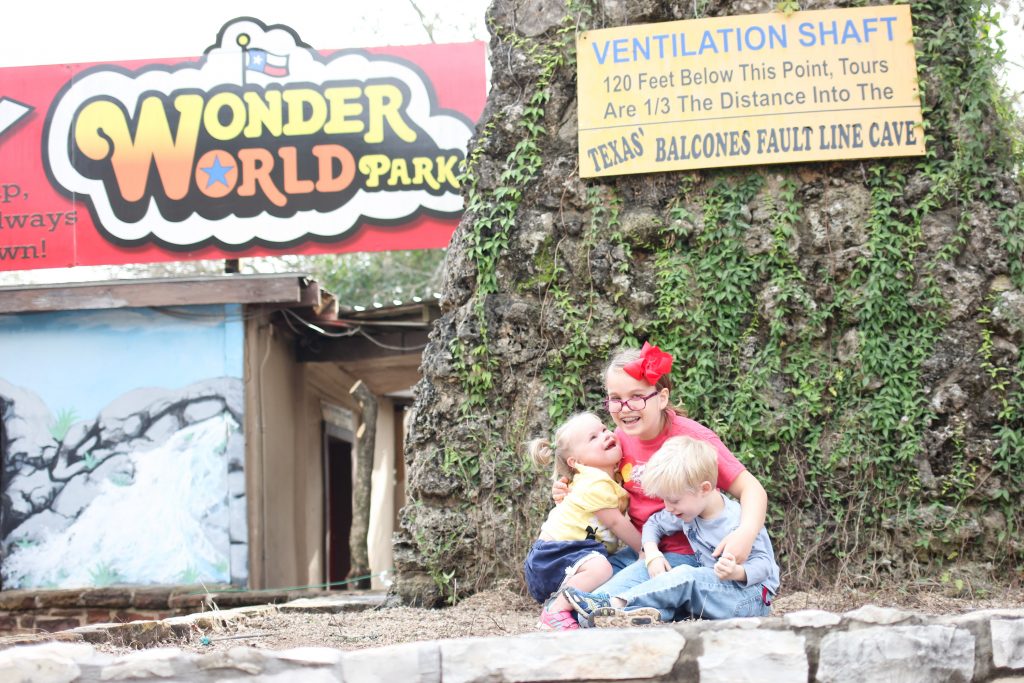 Bottom line, am I glad we went?  Yes!  We had a blast and it wore the babies out enough that they are both currently napping in their cribs which is my major litmus test for if an activity was worth it.  Would we go again?  Um, probably not.  It’s kind of a one time is enough sort of experience.

As for the Pogo Pass?  I have enjoyed having “free” activities to do with the kids, but I don’t think we will be buying one again this summer.  Maybe when the babies are old enough to really take advantage of  more of the activities it will make more sense, but for now I think we’re better off looking for the occasional Groupon.

Remember when I said I was going to try to post once a week?  Apparently I have a lot to say.  lol.  I really should space them out, but I wanted to put out my January plan to hold myself accountable.  Here goes.

Should we check in on my Mini December Goals?