I haven’t had very many substantial blog posts in the past week or so because I’ve been working on this minibook.  I finally finished it and I can’t wait to share!

I <3 minibooks.  I had a blast making my December Daily (here’s Ali’s) and have been looking for an excuse to do another one, so when I recently looked at my to-be-scrapped list and saw that it had 7 or 8 2 page layouts from our recent family cruise, I decided that it was a minibook waiting to happen.  I was also dying to use my new Tim Holtz filmstrip ribbon tape and this project was the perfect excuse. 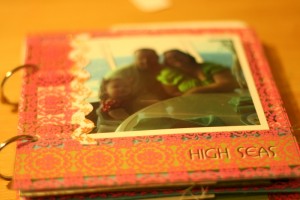 I’m going to break this down into several posts in an effort to avoid making this post 12 pages long.  🙂 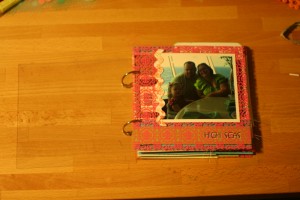 I found some plastic sheet thing in our office that, according to Michael, came out of a picture frame.  Score.  I was going to order an acrylic album, but I’m cheap and impatient so this was way better.  I used my trimmer to cut it and then punched holes in it with my crop-a-dile.  Side note: I am in love with my crop-a-dile.  I used an old acrylic album as a template to decide where to place the holes, but if I had to do it over I would have put 3 holes in the album instead of 2.  I might add some stuff to it later, but for now I’m leaving it blank.

On the right you can see the first page.  I used a Hambly transparency that I bought forever ago.  It was so nice and thick that it worked great as a stand alone page.  I trimmed one of my 4×6 prints down a bit and added some ric rack so the side of the of the photo with staples.  Then I got all fancy and put some stickles on the staples.  Yum…  glitter. 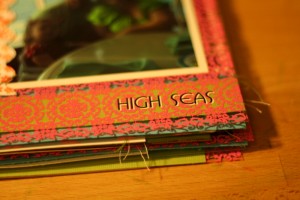 A million years ago, I was on a design team at a local scrapbook store which is now out of business.  Basically, I got products once a month to make a layout for them to display in the store.  One month they gave me some cruise rubbons which I had to get pretty creative with as I had never been on a cruise.  Clearly my pack rat nature has paid off.  I actually found these and added one to this page.

You can see green showing through from the back of the page and that was intentional.  One of the challenges (and a lot of the fun) of working with transparencies is that they are, well, transparent.  To keep the adhesive from showing through on the green strip of cardstock, I used my Xyron machine.

Hmm…  I was hoping to get a few more pages included in this blog post, but it’s already pretty long.  I’ll post some more on Monday.  I would love to know what you guys think!