…with digital project life!  I watched some lovely youtube tutorials and I now feel ready to conquer the world!  Or at least Photoshop.  🙂  I couldn’t wait any longer for my Honey edition before I started playing.  I’m way too cheap to pay for more than one, so I went off in search of free digital cards that I could use.  Y’all, I found the jack pot!  You have to check out this girl’s stuff, it’s amazing and a ton of it is free!  Best of all, I think it’s going to work really well with the Honey edition when and if I buy it.  I had hoped to have a whole spread done by  today but there’s been a bit of a learning curve.  (I don’t even mind that it’s taking forever though because I love it!)  I do have the left half of the layout finished minus the title card which I’ll put in after the Honey edition is released.  ::please be released on Monday:: 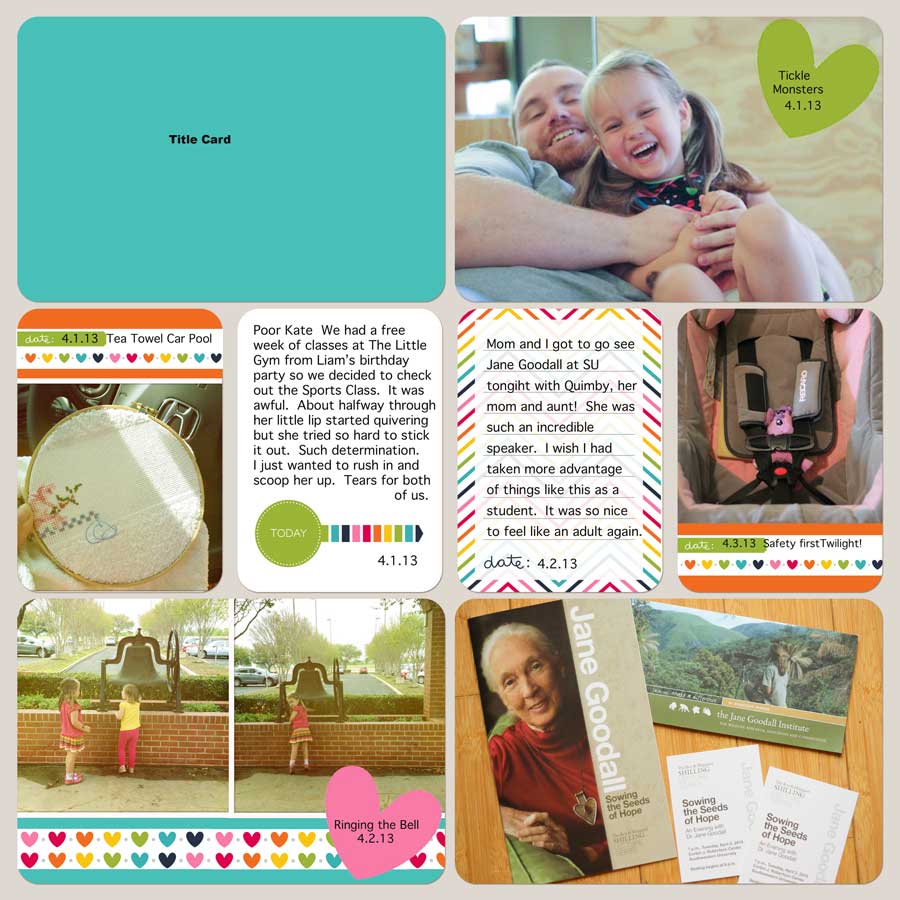 Shall we go through the layout?  (Can you tell that I had extra caffeine today?)  Just imagine that I have a title card in the top corner, mkay?  I want to use at least one thing from the Honey edition for consistency.

Top right is a DSLR photo.  I don’t know the real terms for any of this stuff, but I basically cut and pasted the heart from one of the journaling cards, made it bigger, rotated it a bit, and added some text.

Middle left is a Hipstamatic photo.  They’re square like Instagram photos so when I shrunk it down it left this weird gap.  I cut the bottom off of one of the journaling cards and shrunk it down to go on top.  I loved it so much that I saved it as a separate file.  Never mind that I cut it and resized it 3 different times before that occurred to me.

Middle 2 cards are regular journaling cards.  I took the lines out of the left one and I’m toying with the idea of making it a color.  We’ll see.  Right one I used as is.

Far right is exactly the same as the far left except it’s a DSLR photo.

Bottom left is 2 hipstamatic photos that I shrunk down.  I cut a strip from one of the filler cards and repeated it 2 1/2 times to get the strip of hearts.  (It’s like custom never ending washi tape!!!)  Then I added a pink heart just like I did in the top right.

Bottom left is just a plain DSLR photo.  I’m trying to talk myself out of adding more crap to it.  🙂  It is an example of how I plan to tackle ephemera now that I can’t just slip it in a pocket.  I took a picture and then in 10 years, once I’ve fully committed to going digital, I’ll throw it away.  Until then, I’ll stick it in a box in case I change my mind and switch back to traditional.  🙂

The verdict so far?  Well, it’s slow.  In 3 days, I’ve made 3/4 of a layout.  Also, I can’t just stick ephemera in.  But y’all the good *far* outweighs the bad.  I think that I’ll get much faster.  Also, I love that I can look at a whole layout at once, pictures and journaling, without having to print pictures every week (which just isn’t going to happen.)  I love that I can easily resize the photos instead of being stuck with whatever I print.  I love that when I forgot a picture, I could get it immediately instead of waiting for another print order to arrive.  Most of all?  I love that I could make “washi tape” and “stickers”!  And that I will never run out of my favorite supplies!

I’ve had some questions about what I plan to do at the end of the year and the answer is I’m not sure.  Eventually I want to get it printed as a blurb book, but I’m not too worried about if that happens at the end of this year or 10 years from now.  I’m definitely not printing individual pages.  2 of my biggest reasons for going digital were to save space (I have way too many albums) and to save money for other scrappy purchases.  Printing 12×12 pages really cuts down on those benefits.

Oh, and I’m almost done with our B is for Bumbleebee stuff!  I’m hoping to finish it up this weekend and have it post on Monday.  🙂