It’s no secret that I *love* pretty much everything that October Afternoon makes and their Midway collection is no exception.  ::cough cough::  add me to your design team ::cough cough::  It was perfect to scrap a trip we took to the zoo last April. 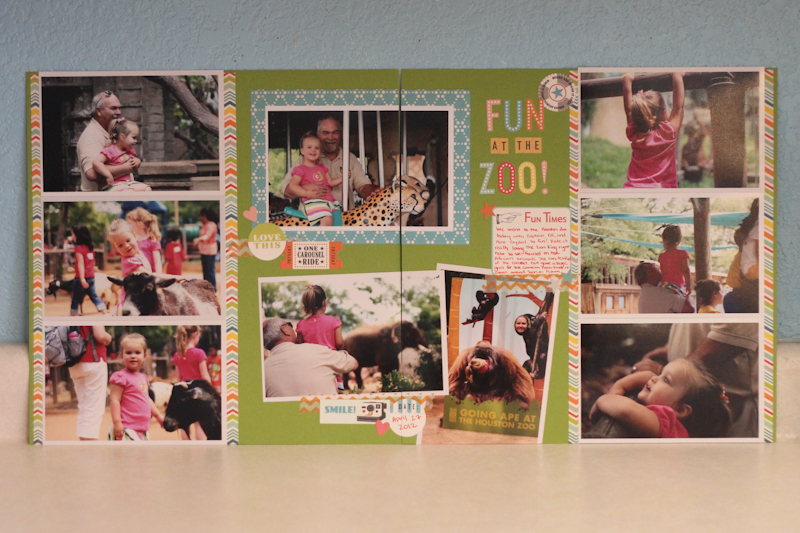 I usually use a 6 inch piece of patterned paper on each edge and trim the pictures down a bit, but I could already tell that I was going to run out of this paper so I cut thin stripes that went just under the edge of the paper.  Worked out great if you ask me.  🙂 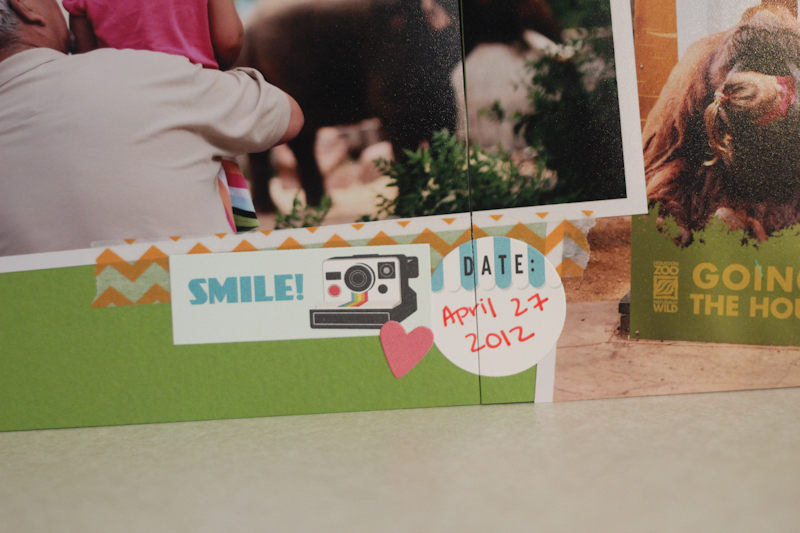 I love all of the stickers! 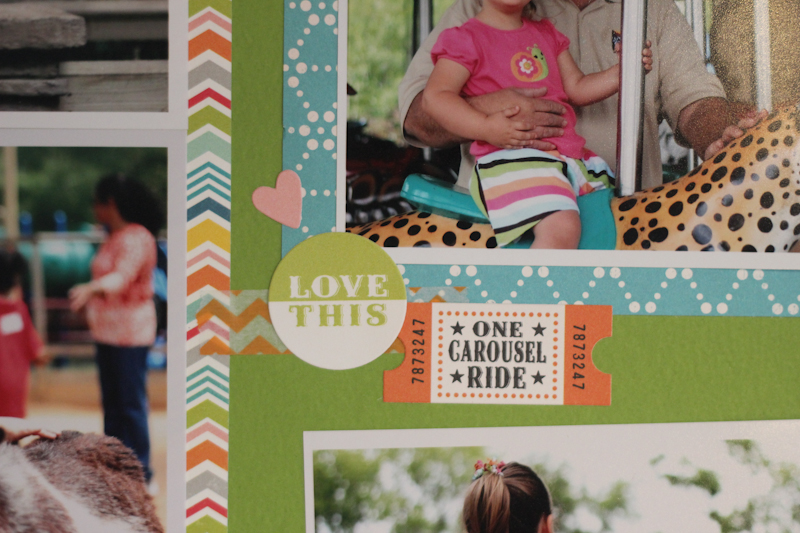 I was going for a three-clusters-of-embellishment thing a la Shimelle (my hero) and this is my second cluster. 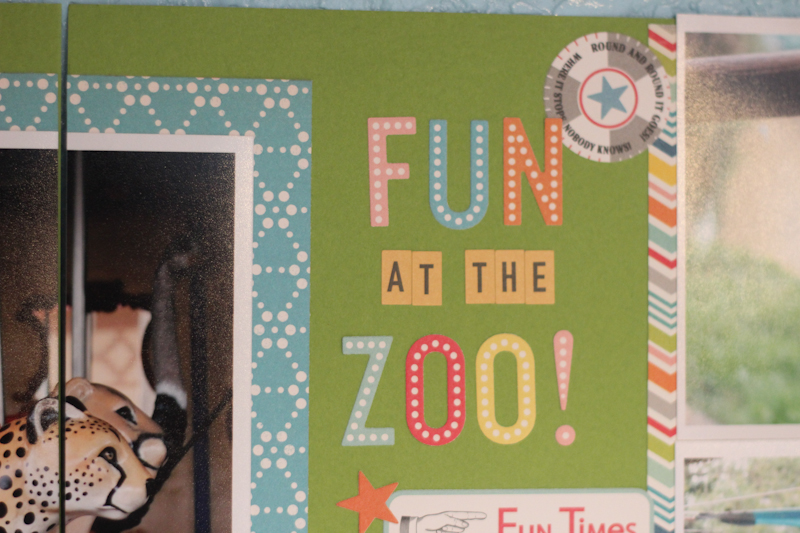 Third cluster and title using more awesome stickers.  Love!  I’ve got to find a way to get my hands on more of this paper.

Remember the JOY letters I made for Christmas? I made another set for Valentine’s Day using last year’s Echo Park paper. 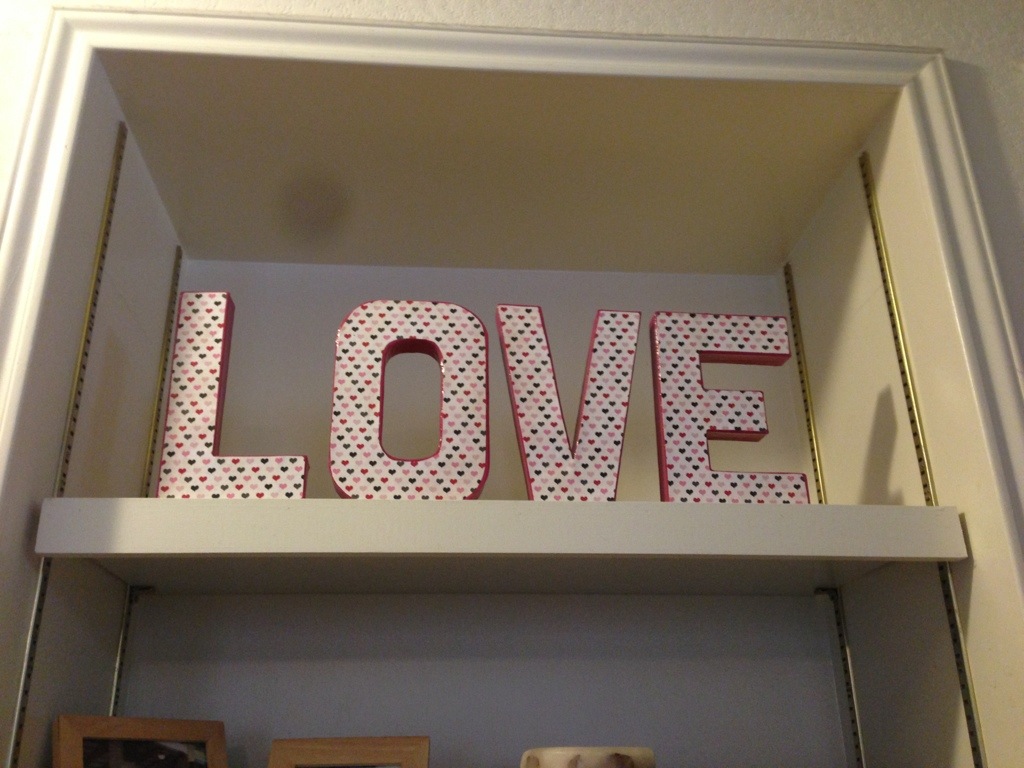 I love how they turned out!  I think I’m going to try to make several more sets and then rotate them out with the seasons.  Next up?  RaptorDad has suggested LUCKY for March. Sounds good to me!  I’m also planning on BOO for October.  Other suggestions?

Now for a goals update.  My goals for January were:

1.  Finish March and April layouts in Kate’s scrapbook.  I finished March and made some progress on April, but I didn’t finish.

2.  Finish December Daily.  I got a few more pages done, but I still have a ways to go.  I’ve finished though Day 18.

3.  Sort and order pictures for May and June.  I haven’t placed the order (yet) but I have sorted, edited, and curated pictures from May, June, July, and part of August.  I’m actually pretty impressed with myself for this.  I hate sorting through pictures.

4.  Sort and order Project Life pics for April, May, and June.  Again, not ordered, but I have them all sorted and ready to order for April, May, June, July and part of August.  Incidentally, those months are totally done aside from slipping 1 or 2 photos a week into the page protectors one I get them ordered.  Wow.  🙂

5.  Project Life journaling for November.  Done and then some.  I’ve finished November, December and January.  Dare I say it?  The journaling is caught up!

6.  Start making dinner at least once a week.  I’ve actually taken over almost all of the cooking duties since Michael can’t lift over 8 pounds with his PICC line.  To be fair, most of these are frozen meals that my friends have sent over (bless them!) but I’m checking this off anyway.

Given the craziness that has been our life for the past few weeks, I’m pretty impressed that I’ve accomplished any of this.  🙂  Now for my February goals.

1.  Finish April and May layouts.  This one is dependent upon me actually getting my pictures back from the printers which would involve me ordering them…  See number 4.

3.  Sort and select phone pics for September, October, November, December and January Project Life.  I like to do the phone pics first and then see where I need a DSLR pic to fill in after.  The majority of my Project Life is phone photos.

5.  Design and make Valentine’s for Kate.