I’m always looking for cool crafty toys.  If they are educational even better.  I came across this Etsy Listing for an embroidered stuffed felt alphabet about a year ago and promptly decided that there was no reason I couldn’t make those myself.  There was a fair amount of cussing involved, but I was quite pleased with the final result.  I made the first set for Raptor’s 1st birthday and they are still a big hit in our house!

I finished a set last weekend for a friend of mine and I think she’s going to be pleased with them.  Because she’s awesome, I threw in an extra L because her son’s name is Will.  She is getting a set of numbers too.  Each number has an embroidered star that corresponds with the number because that seemed like a cool idea at the time.  It seemed less cool when I was trying to squeeze 9 stars on the number 9, but they ended up looking great so I’m glad I stuck with it.  This has been a fun project! 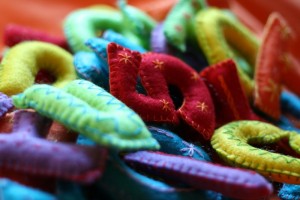 Hmm…  I just pulled them all out to take some pictures.  Kate was intrigued by the addition of more letters.  I think the pictures are going to have to wait. 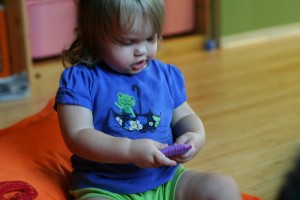 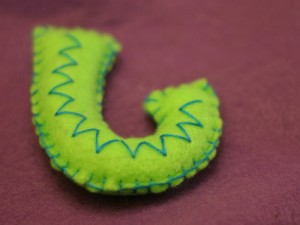 Um, yeah, I embroidered the J backwards.  Whoops.  And the X appears to have disappeared into the black hole that is my living room.  Maybe Kate ate it.  She is a growing dinosaur after all.  Guess I’ll be working on some more tonight.  Since I’m redoing them anyway, I’ll add a quick tutorial.  🙂

I have some old bulletin board letters from my teaching days which I traced onto felt and cut out.  Cut out 2 of each letter. 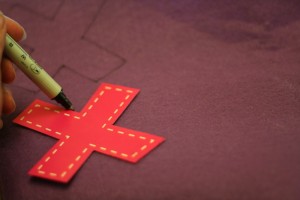 I’ve learned a fair amount of embroidery in the past few years working on Christmas stockings and I watched a few YouTube videos to fill in the gaps- namely the blanket stitch.  Make sure that you’re not embroidering them backwards. 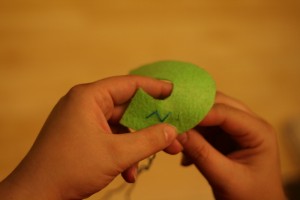 After embroidering the front of the letters, I blanket stitched them together and filled them with polyfill.  Usually I stuff it with a knitting needle, but in a pinch the scissors work too. 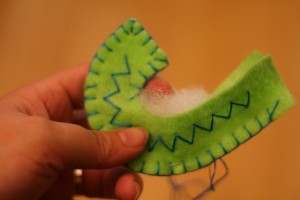 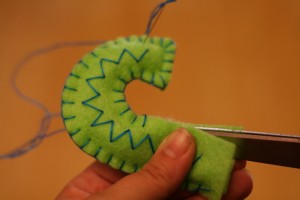 They’re not quick to make, I figure it’s takes me about 2 hours per letter, but it gives me an excuse to watch junk TV while I work on them.

You could probably do the embroidery by hand and then machine stitch them if you wanted to make them quicker, but I enjoy hand stitching.  What can I say- I’m a sucker for documentaries on Netflix Watch Instant.  Then there’s the fact that I can barely thread my sewing machine.  Yeah, I think I’ll stick to hand sewing for now.  🙂 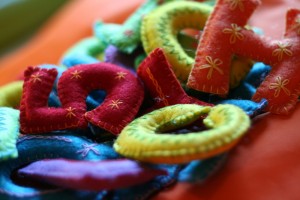