October has been a doozy y’all.  We were supposed to go on an epic road trip with one of my good friends this month over Fall Break.  To say that I was excited would be a massive understatement.  The plan was to drive about an hour north of Lubbock on the first day to get to our staging point.  Then we were going to wake up and hit Palo Duro Canyon and Cadillac Ranch before heading on to Santa Fe for the night.  Then spend the day at this crazy place called Meow Wolf before driving to another staging point.  Wake up, spend the morning at White Sands, check out Roswell, and spend one more night on the road.  Then home!  6 kids, 2 moms, a 12 passenger van, and a whole lot of caffeine.  What could go wrong?

Turns out a lot can go wrong.  lol. 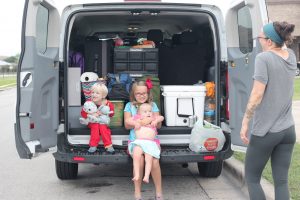 It started out going well enough.  We left at 9am as planned, and we only had to turn around once to get the little potty (forgetting that would have been an epic disaster!)  The van had enough room that everyone had enough space to be happy and we had plenty of devices.  lol.  I’m not a huge fan of screen time as a general rule, but they are totally necessary for a long road trip. 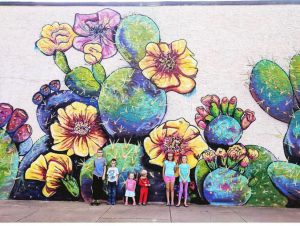 We stopped in some tiny town for a picnic lunch and found this super cool wall!  My friend Erin got this awesome pic of the kids.  We even pulled over on the side of the road at one point and snagged a cotton ball for the kids to check out.  Things were going a little too well… 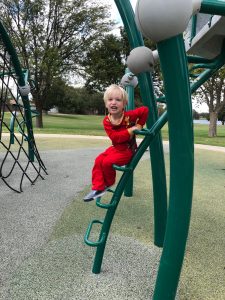 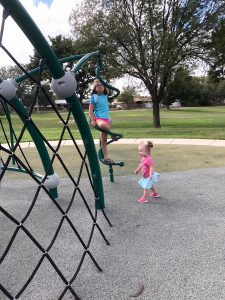 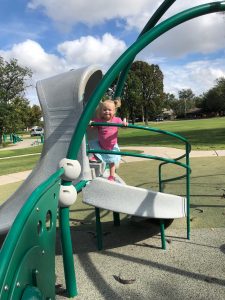 We made it to Lubbock around 3:00 and drove around for a bit looking for a fun park.  We finally found one and let the kids out to play and run around for an hour or so.  Everyone was having a blast.  We loaded the kids back up in the van and we were driving about 5 minutes away for dinner when all hell broke loose.  Mia started puking.  A lot.  We pulled over to clean her up and my friend’s son got his hand shut in the back of the van because it was so dang windy.  I honestly thought his finger was broken.  Thankfully it was just bruised.

At this point we had to decide if we wanted to A.  Drive on another hour to where we had non refundable hotel reservations.  B.  Get a hotel room in Lubbock and then reassess in the morning.  C.  Abandon ship and drive home.  The thought of unpacking the entire van only to deal with a puking child all night before loading up a (likely) puke covered pac n play and driving home smelling that the whole way was too much for us so we just drove home.  There were many many tears, but in the end it was the right decision.

We finally made it home around 2:30 AM and RaptorDad took over Mia care.  Poor thing just couldn’t keep down anything.  Monday morning I took her to the dr and they gave us a prescription for zofran, but told me that if she couldn’t keep down the zofran that we needed to think about taking her to the Children’s Hospital ER.  Well, she rallied for a bit, but woke up from her nap and promptly emptied the contents of her stomach.  🙁 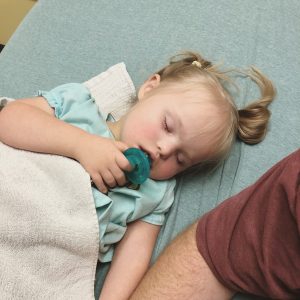 So off to the ER we went.  They ended up doing a CT scan of her brain because of her history of enlarged ventricles (so glad!  We were in the ER a month ago for vomiting and they decided not to which made me nervous.)  and everything was normal.  Such a huge relief.  The CT technician gave her a binky.  lol.  Mia loved it.  They also gave her IV fluids and IV zofran.  Poor thing was so dehydrated that they had to bring in 2 separate “IV experts” before finally finding a usable vein in her foot.

I think the scariest part was when the ER attending told me not to wait so long next time before bringing her in.  🙁  She just went downhill so fast!  I mean, from the time she started vomiting to the time we made it to the ER was less than 24 hours.  And she went to the pediatrician in the mean time!  Still, it was a good lesson for me in listening to my mommy instinct and not being so concerned that other people will think that I’m overreacting.  Also, so so so so so so glad that my friend listened to her mommy instinct in getting us home when I thought we just couldn’t drive anymore.  I can’t imagine if we had been on the road for 6-8 hours with Mia as sick as she was.