And I am so proud of myself!  It was a bit more of a challenge than I was anticipating, but I love the finished project and plan to make a few more so I have a summer wardrobe.  I started out with a pattern of course.  What I was not expecting was that the sizing on the pattern was a bunch of lies!  Lies I tell you!  Sadly, I am not a small person, but I swallowed my pride and dutifully bought a pattern in the size that I wear.  Ok, ok,  it was one size smaller, so sue me.  They didn’t have it in tub-o-lard size.  When I got home, I decided to check my measurements against the pattern measurements.  Imagine my surprise when my tush was 10 inches larger than the pattern.  Seriously.  I don’t even know how that is possible.  Never one to be deterred by such frivolities as a lack of a workable pattern, I pressed on.

I did a bit of math and redrew the pattern.  At this point, it wouldn’t lay on the fabric like I wanted (stripes should go up and down *not* side to side) so I redrew it again to make the a-line a bit steeper.  Then I remembered that my waist is smaller than dress designers think it should be given the size of my tush and I decided that since I was making this pattern I might as well make it fit me.  A bit more redrawing later and I had a pattern that I thought would work.  At this point, it seemed wise to make the skirt out of some cheap dollar-a-yard fabric we bought years and years ago first to see how it fit before cutting up my pretty fabric.

I sewed up the sides and tried it on.  Um, yeah, it was enormous.  Maybe they were on to something with this whole sizing thing.  I had Michael pin it and then had a moment of panic over how I was going to get it off.  In the end, it went over my head without disturbing the pins.  I cut off the excess, sewed it up and tried it back on.  After Round 2 of pinning, cutting and sewing, I had a template that fit pretty well!  It’s very loose so that it can fit over my head.  This had the added benefit of making it super comfy.  Plus, no zipper or elastic required!  🙂

I turned it inside out and laid it out on top of my nice fabric.  Then I just cut along the template.  This only really worked because in the initial pattern the front and back were exactly the same. 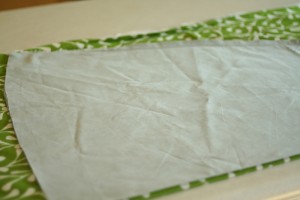 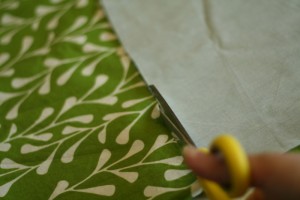 I sewed up the two sides and tried it on.  Lose, but comfy.  My kind of skirt.  🙂  Next up was the hem and I dithered over this for a while because I wasn’t really sure how to go about doing it.  I’ve seen my Mimi hem things before though, so I decided to just press ahead.  She continually measures the hem as she is ironing it.  This seemed like a pretty good idea to me, but I couldn’t find a ruler.  Necessity is the mother of invention.  I marked off a line on a scrap of chipboard and used it as a gauge. 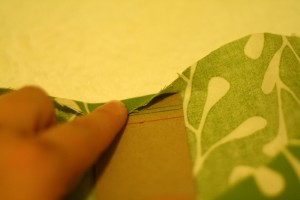 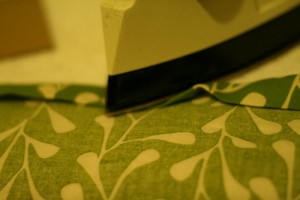 I turned the hem under twice as instructed, pinned it and then stitched it.  Then I did the exact same thing for the waistband. 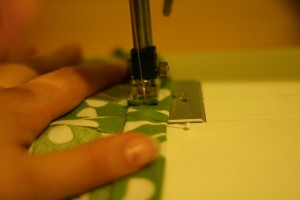 Et viola!  I have a skirt.  The only thing left was to get some awesome shoes for it.  When my mom asked me what I wanted for my birthday, I told her that I wanted wildly impractical shoes to go with this skirt.  I love them.  I may not be able to walk tomorrow, but I don’t care.  🙂 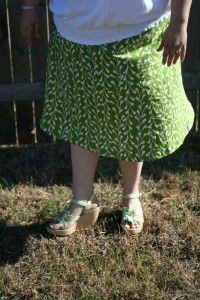 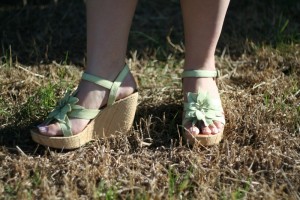